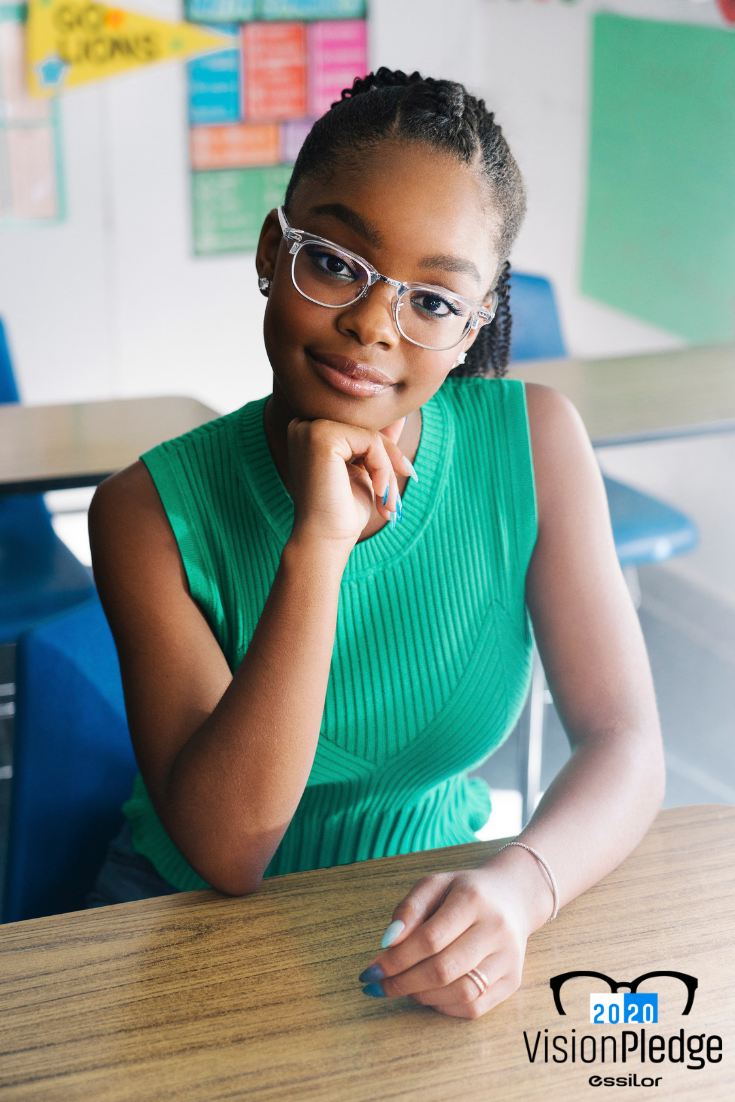 Amid growing concern of myopia to children’s vision health, “Black-ish” star Martin encourages parents to sign the Essilor 20/20 Vision Pledge to prioritize high quality vision solutions for their children and the opportunity to win eyeglasses for their entire school

DALLAS, Aug. 6, 2019 /PRNewswire/ – Essilor of America and actress Marsai Martin are raising awareness about the urgent need for children across the nation to receive total vision care this back to school season – care which includes high-quality, comprehensive eye exams from eyecare professionals who offer advanced lens technology that keep pace with the changing needs of children’s eye health.

Today’s families are facing an eye care health crisis. While one in 4 parents have a child with myopia, studies show that nearly half of all children under the age of six aren’t receiving regular eye examinations. To add to this growing issue, many parents are unaware that not all eyeglasses are the same and that there is a difference in lens quality and features that can impact their child’s visual outcome.

“We are facing unprecedented rates of myopia. Today, children’s eyes are exposed to harmful blue light, ultraviolet light (UV) and digital eye strain like never before. Yet nearly half of parents with children under age six have never taken their child to the eye doctor, even though it’s recommended they have three doctor visits by that age,” said Dr. Millicent Knight, Senior Vice President of Essilor’s Customer Development Group.

“Parents also need to know that where you go matters as much as when you go said Knight. “There is a big difference in a child’s vision outcome when choosing professionals who prioritize the most advanced and best lens technologies for their patients’ individual needs.”

The Essilor 20/20 Vision Pledge is a new campaign introduced by Essilor of America and Marsai Martin that encourages parents to take immediate action to prioritize their children’s best vision, a critical element for education success, this back-to-school season.

Martin, 14, who plays Diane Johnson on the ABC Emmy-nominated hit comedy “Black-ish,” struggled in school until her vision issues were successfully diagnosed and treated by an eyecare professional who offered her the right solution for her needs. Her story is relevant to many students, as studies1 show nearly half (49%) of children with myopia have difficulty in the classroom, and 41 percent of parents with myopic children said their children struggle with everyday activities.

“I know what it’s like to sit in a classroom where everything looks blurry. No child should have to go through that experience,” Martin said. “Through this Pledge and partnership, I hope every child in America gets the opportunity to see the world clearly, and to be at their best in the classroom and in life.”

“Parents will invest billions this year to prepare their children for school, but without the ability to see their best, children will be at a disadvantage in the classroom. Marsai’s story underscores the need for vision to be at the top of the list, as well as the difference that can be made in the life of a child when they’re paired with the right eye doctor who offers the right lens solutions. Essilor answers the call with our network of Essilor Experts, which is comprised of independent eye doctors who have access to advanced lens technologies and who are dedicated to taking a personalized approach to eye care,” said Sherianne James, Chief Marketing Officer at Essilor of America. “The Essilor 20/20 Vision Pledge is a compelling way to empower parents to make the right choice as Essilor drives toward a 2020 goal of better vision health for all.”

Find your local or nearest Essilor Expert by visiting: https://www.essilorusa.com/get-lenses/essilor-experts#wheretobuy

To enter the Essilor 20/20 Vision Pledge and for official rules, visit: 2020visionpledge.com

About Marsai Martin
Rising star Marsai Martin, at just 14-years-old, is already on course to be a whirlwind sensation. At the age of five she landed her first national commercial and shortly after relocating to Los Angeles, she was cast as Diane Johnson on the ABC Emmy-nominated hit comedy “Black-ish.” Alongside an all-star cast, the young starlet has stolen the hearts of viewers who tune in every week to see her hilarious and witty antics on the show. Her work on the show has earned her ten NAACP Image Awards as well as a Screen Actors Guild Award. At the age of 10 she conceptualized and pitched a movie idea to Will Packer and Universal which became the feature film, Little. As the star and Executive Producer on the film, she has become a part of Hollywood history as the youngest person to EP a major Hollywood film. With opportunities presenting themselves daily, Marsai is excited about uplifting diverse and young voices through her production company, Genius Productions, who signed an overall deal with Universal. In addition to acting, she loves producing, singing, dancing and creating her own content for social media.

About Essilor of America, Inc.
Essilor, the leading manufacturer of optical lenses in the United States, is driven by the company's mission of improving lives by improving sight.  A pioneer in the development and production of ophthalmic lenses, Essilor employs more than 10,000 people throughout North America.  Essilor manufactures optical lenses under the Varilux®, Crizal®, Transitions®, Xperio UV™, Eyezen™, and other Essilor brand names. Essilor Laboratories of America, Inc. is the largest and most trusted optical lab network in the U.S. and offers a wide choice of products and services to eyecare professionals across the nation. Essilor of America, Inc. (Essilor) is a subsidiary of Paris-based Essilor International.

1 Research conducted by MetrixLab on behalf of Essilor of more than 1,000 parents of children ages 7-17 who have myopia and over 600 children with myopia.